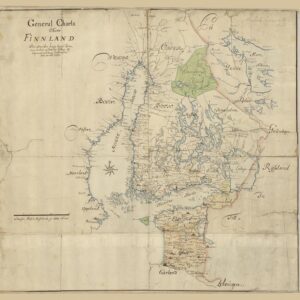 Kexholm County (Swedish: Kexholms län, Finnish: Käkisalmen lääni) was a county of the Swedish Empire from 1634 to 1721, when the southern part was ceded to the Russian Empire in the Treaty of Nystad. The capital of the county was Kexholm (Finnish: Käkisalmi), which today is Priozersk.

After the Russian victory in the Finnish War of 1809, Sweden ceded all its territory in Finland to Russia by the Treaty of Fredrikshamn. As part of the Russian Empire Finland came to constitute a separate grand duchy. In 1812 Russia made the territories of the Vyborg Governorate part of the new Grand Duchy of Finland as Viipuri Province.

We use cookies on our website to give you the most relevant experience by remembering your preferences and repeat visits. By clicking “Accept All”, you consent to the use of ALL the cookies. However, you may visit "Cookie Settings" to provide a controlled consent.
Cookie SettingsAccept All
Manage consent

This website uses cookies to improve your experience while you navigate through the website. Out of these, the cookies that are categorized as necessary are stored on your browser as they are essential for the working of basic functionalities of the website. We also use third-party cookies that help us analyze and understand how you use this website. These cookies will be stored in your browser only with your consent. You also have the option to opt-out of these cookies. But opting out of some of these cookies may affect your browsing experience.
Necessary Always Enabled
Necessary cookies are absolutely essential for the website to function properly. These cookies ensure basic functionalities and security features of the website, anonymously.
Functional
Functional cookies help to perform certain functionalities like sharing the content of the website on social media platforms, collect feedbacks, and other third-party features.
Performance
Performance cookies are used to understand and analyze the key performance indexes of the website which helps in delivering a better user experience for the visitors.
Analytics
Analytical cookies are used to understand how visitors interact with the website. These cookies help provide information on metrics the number of visitors, bounce rate, traffic source, etc.
Advertisement
Advertisement cookies are used to provide visitors with relevant ads and marketing campaigns. These cookies track visitors across websites and collect information to provide customized ads.
Others
Other uncategorized cookies are those that are being analyzed and have not been classified into a category as yet.
SAVE & ACCEPT